Why should I choose Mu Beta Psi?

While Mu Beta Psi is a national fraternity, we still like to run ourselves to encourage close knit bonds of Brotherhood. While some other larger music fraternities may boast of stronger numbers, we believe in quality over quantity.

We are honorary, we are devoted to service, and form incredibly strong bonds with each other. Sure there are other music fraternities out there that would love to accept your school, but ask yourself this –

If you want a close, lifelong, unbreakable bond, Mu Beta Psi is the only choice.

I could have stuck to three words and simply said “friendship”, but in Mu Beta Psi, Brotherhood lasts a lifetime. As unbelievable as it may sound, you’re guaranteed to make at least one lasting friendship, all through the common bonds that unite us all.

So who exactly are you guys?

Mu Beta Psi is one of the oldest co-ed music fraternities in the nation, being founded in 1925. We currently have 8 Active Chapters located along the East Coast and in Michigan’s Upper Peninsula. We are co-ed, we are honorary, and we are devoted to service.

I want to start a Chapter. What do I do?

First, thanks for your interest! The first thing you should start with is find people who want to join you in creating a chapter. We require a minimum of 15 people who are willing to learn about Mu Beta Psi for a full year. We also require 2 faculty advisors.

You’re honorary. Does that mean there’s a GPA requirement?

While Mu Beta Psi’s National Constitution doesn’t outline a specific GPA needed for someone to join, many Chapters do choose to institute an academic policy. We are primarily focused on music service.

How long will it take to get a Chapter?

Generally speaking, the timetable from a formal petition to a newly founded Chapter takes one year. These times can sometimes fluctuate depending on different variables, but a year is the typical amount of time. For more details, please contact the National Vice President of Expansion. 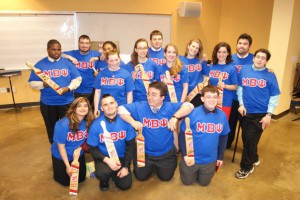